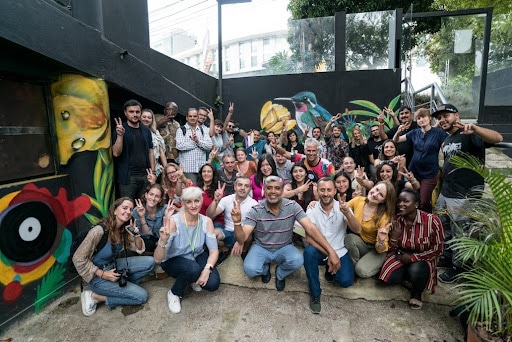 “The historic MasterPeace in concert was a momentous mark in the history of MasterPeace, and we spent a lot of time organizing with other MasterPeace clubs to have tens of similar concerts going on around the world in tandem with the main event in the Netherlands at Ziggo Dome that saw artists from conflict areas share a platform.”

“This experience helped me, differentiate between managerial leadership and influential leadership, the later which is more impactful especially when you are working with young people from around the world and artist who don’t like bureaucracy and hierarchy, and being at the front line, it was always interesting interacting with different parts of the world at the same time, because one part of the world would be in crisis while the other side of the world would be celebrating at the same time and we have to come up with projects and insights for both or multiple scenarios.”

“Seven years later, after working with MasterPeace my sense of multi-culture, the essence of inclusion and diversity made me richer in experience and character, and that is something that I really I’m proud of every time I reflect upon my engagement with MasterPeace.”

Some of the key outstanding moments which Aida looks back on include the last boot camp she co-organized in Colombia which turned out to be the biggest and may be one of the most successful one. “Hearing the stories from different young leaders from around the world has always been very special to me, because you witness young people grow as strong leaders who are then able to influence a whole community.” Aida shares she is still in contact with many MasterPeace young leaders even after she stopped working at MasterPeace.

“I’m inspired to see that the movement is going on strong and the clubs are growing, the formula works and the foundation of MasterPeace is built to last. The formula has been tested, proven to work and transformative, and I know that MasterPeace will celebrate twenty, fifty and many more years as it a dynamic organization that is needed in the world.”