Skip to content
Creating peace. Together
Inspire people to use their talents & energy for peacebuilding
Sustainable future
Support the world to achieve the Sustainable Development Goals
Be a Changemaker
Mobilize change-makers to co-create together for their local communities
Previous
Next

FROM AROUND THE GLOBE 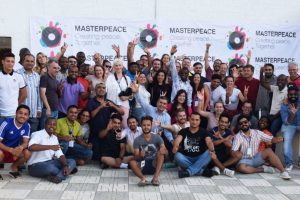 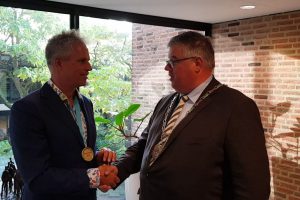 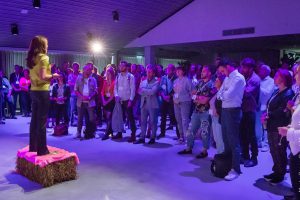 From MasterPeace series #ACT! #CreativeTwinning!!📣
As part of MasterPeace project ACT! Artists Create. Together. In #Albania, for #music our team @actforsociety worked on supporting the organization of @tiranaartfest , which spanned 8 stages and inviting 1000 students from the 30 high schools of Tirana, with approximately 40000 students participated more than 400 performances from the students. #genderequality @nl_in_albania ...

As part of #MasterPeace project #ACT! Artists Create. Together. The 'Walls of Connection' in #Sarajevo done by our MasterPeace Club and partner organization @ngo.youth.power painted at the Fifth Gymnasium Sarajevo was chosen due to its meaningful location at the neighborhood Dobrinja. During the War in #BosniaandHerzegovina (1992-1995) Dobrinja was named during the war, ‘the city’s most isolated neighborhood’.
#streetart #artists #wallstreet #urbanart #creativetwinning #bosniaart #peace #culture ...

H4BF - One Life ♥️
-
@peace_building_cameroon
-
In the wake of the ongoing crisis plaguing the English speaking regions of Cameroon with young people including women and children being the most vulnerable and greatly affected groups of persons. Hope for a better Future (H4BF) with support from local and international organizations such as Alert Fund For Youths, Faith in the Commonwealth Youth Network, MasterPeace International, International Cities of Peace, Rotary Club-Kumbo and Peace One Day brought together a dazzling array of Young talented artists and sound engineers from the North West Region of Cameroon to produce a peace song with carefully crafted lyrics.

The song in its entirety including instrumentals and the lyrics stands in the middle, remains non-judgmental resonate Peace and sells peace like a product and seeks to tell Cameroon and the world that we all have a responsibility to make this place a better place and believes it is absolutely a possibility.
“ONE LIFE” is a reflection of passion, commitment, dedication, love and a burning desire for peace in Cameroon and world world at large. It is an apolitical and non-denominational piece of song bringing out the voices of young people who believe it will be nice if there was peace and no one getting killed. It speaks the voices of the voiceless. Listen, Like, Comment and share. Peace!! ...

Official start of the #globalbootcamp2019 in #monastir🎉
.
60+ Participants
40+ Countries
5 Continents
.
On this beautiful Monday we had the pleasure of welcoming all participants of this years Global Bootcamp! Breaking the Monday morning barriers by stepping forward to answer fun and challenging questions, personal storytelling in groups and of course a great lunch to better get to know one another.
-
After lunch everyone gathered at the Idea Bazaar. Presenting their best projects to gather ‘funding’ from other participants in the form of fake paper money. We’ll tell you about the secret bazaar winners in a later story.. It’s still a surprise for now 😉
-
To show us parts of the beautiful Monastir our wonderful Clubleader and organiser @selmi.bechir1 took us all on a Walk of Peace to explore the city and visit the Higher School of Health Sciences and Techniques of Monastir.
-
Then back at the hotel the participants gathered for their family groups or ‘tribes’ to have some quality family time to discuss todays happenings. The evening was finished off with dinner and an amazing Tunesian night where we all got to explore more about the culture here, listen to amazing music and enjoy a lovely fashion show that shows off the beautiful colours and vibrancy Tunesia has to offer!
-
Stay updated and do check out our stories for more behind the scenes moments 😉 ...

A short message from Aart Bos on receiving the Peace Award at the Peace Symposium 2019 in Nijmegen, the Netherlands. Enjoy! ...

MasterPeace is honored to receive the ‘Peace Symposium' award

We are very proud to announce that MasterPeace has been awarded ‘Peace Symposium; for its innovative and inspirational message of positivity and ‘using culture and art in global peace actions’, presented by the city of Nijmegen in collaboration with the coalition Peace Missions Without Weapons.

In its official statement, the city of Nijmegen, which is no stranger to peace-building, stated that "The award comes as a recognition of MasterPeace's unique standpoint of positivity realizing hundreds of projects in the Netherlands and worldwide based on the mission to mobilize talents from the local communities.’ As part of the city’s celebration of the International Day of Nonviolence, MasterPeace will be recognized among two other awardees, Peace Brigades - The Netherlands for their work on assisting human rights defenders, and Eirene Netherlands for their work on nonviolent communication in the Balkans

And not a coincidence, today we also learnt that MasterPeace Sri Lanka received the N-Peace award recognizing stories of peacebuilders, and a few days ago India received National Healthcare Leadership award.

Thanks to you our MasterPeace Clubs for making this possible. ...

We are really proud of the team of MasterPeace Club-Uganda, who have been collecting stories for The Men's Writing Challenge for two months already! The campaign is aiming to involve men and boys in the fight for gender equality. 🏃🏾‍♂🏃‍♀️

Good news❣️📣 The deadline for receiving stories is now extended to 31 January 2020 (find more info on their FB page). The stories might be published on their social media and on our main website as well.

Let's share our stories and inspire others to ACT! ✊

Am so pleased to announce that we ( #MPUganda) have finally completed editing your stories submitted for the #AbasajjaBawandike Men's Writing Challenge!

To the courageous men who entered this writing challenge before 1st January 2020, keep checking our page starting tomorrow ~ Wed | 15th | Jan |2020, to know if your story qualified! It could run any day...

We greatly appreciate every participant & understand how hard it must have been for you to open up about your thoughts and feelings in an #Essay or #Essays!

Special Thanks to our #Volunteers @Viola Kusasira of #Smart24TV, @Joan Lule of #TopTV, @Iryn Nalumu of #Radio4, @Judith from UNIDO, Morgan Mugabi of #TopMedia
& Enock Nsubuga our Projects Coordinator for putting in the time to sort, listen to transcribe & make sense of these great stories submitted!

Happy Holidays!
From Our MasterPeace Family To Yours!
... See MoreSee Less

As part of ACT! summits, Great Minds Meeting in #mostar was organized as a unique and innovative concept of a one-day summit. The summit is the first of its kind in #bosnia with the unique model of using interactive workshops and performances as methods of summit.

The Great Minds Meeting is traditionally held in the #netherlands for 6 years, and this year was organized for the first time in Mostar thanks to ACT! Creative Twinning

The summit invited Multi Stakeholders working on the ACT! projects locally as a crystalizing moment where representatives from governmental such as Inter-governmental organization OSCE Mission to Bosnia and Herzegovina, Ministry of Education, Sport and Culture HNC, Institute for Education.
Artists such as Marija Milas, members of the folklore ensemble, young emerging musicians from Mostar Rock School, trained muralists of Walls of Connection in Bosnia. SMEs such as Eko Jasmina Black Dog Pub Konoba Taurus Travel and Tours
and thanks to our main partners at the #dutchembassyinbosnia

In addition of showcasing ACT! building blocks where stakeholders discussed on next steps, the project resulted in concrete projects and opened doors for collaboration such as the artistic set-up as a collaboration between Balkan Art Zone OneBeat Balkans and Youth Power.

ACT! Creative Twinning project aims to support the development of cultural activities in countries bordering the EU where MasterPeace works to empower youth in Albania, Bosnia, Georgia and Morocco and twin with The Netherlands. In the 4 countries, we work on 4 artistic building blocks of music🎼, street art visualization 🎨, storytelling 🎙and summits🏔 with an inclusive approach of involving marginalized groups as an active part of the project.

The Walls of Connection in #Marneuli, #Georgia a city highly populated by different ethnic groups such as Georgians, Armenians, and Azerbaijanians. As a pre-painting discussion, in their ‘dream of connection,’ stakeholders from the city lead by the Before the local Youth Initiative Group carried out a series of talks about the problematic topics of the community. Based on the research it became clear that ‘cultural diversity’ and issues related to the environment played an important role in people’s lives. This is the reason why the community decided to paint the wall about intercultural dialogue and environmental protection.

With the statement ‘#Earth Is Our Home’ which is made for everyone equally, Georgia’s most famous artist Tornike Melikidze known as Joko nda trained local artists such as Koba Nozadze Aram Akopyan გიორგი ზაზარაშვილი Anuki Papelishvili and Nino Koshoridze allowed them to try themselves in different topics and the direction of #Graffiti. Youngsters painted the wall at the cross-roads leading to the city for the community to visibly start the intercultural conversation around the future of their neighborhood. We work in several cities in Georgia in cocreation with many stakeholders and Embassy of the Netherlands in Georgia

ACT! Creative Twinning project aims to support the development of cultural activities in countries bordering the EU where MasterPeace works to empower youth in #Albania, #Bosnia, #Georgia and #Morocco and twin with The Netherlands. In the 4 countries, we work on 4 artistic building blocks of music🎼, #streetart visualization 🎨, storytelling 🎙and summits🏔 with an inclusive approach of involving marginalized groups as an active part of the project.

As part of MasterPeace project ACT! Artists Create. Together. In #Albania, for #music the team worked on supporting the organization of Tirana Art Fest, which spanned 8 stages and inviting 1000 students from the 30 high schools of Tirana, with approximately 40000 students participated more than 400 performances from the students.

The theme of the concerts this year was #gender equality, as schools had to choose the same number of boys and girls to represent the school at #Tirana's biggest square Skanderbeg’s Square, and we are very proud on the support of Embassy of the Netherlands in Albania on #ACT and twinning between talents of #Albania and #TheNetherlands.

ACT! Creative Twinning project aims to support the development of cultural activities in countries bordering the EU where MasterPeace works to empower youth in Albania, Bosnia, Georgia and Morocco and twin with The Netherlands. In the 4 countries, we work on 4 artistic building blocks of music🎼, street art visualization 🎨, storytelling 🎙and summits🏔 with an inclusive approach of involving marginalized groups as an active part of the project.

Wow.. This is awesome.. We hope to carry out an event of this magnitude in Cameroon sometime in future