"It was a journey of a lifetime."

Medellín was everything we dreamt of and more: the city was a mix of culture, creativity and peace-building! It made headlines  during the past few years for its transformational story, growing from the world’s most dangerous city to an award-winning example of positivity, creativity and innovation. From small alleys to big conference rooms, passing walls of hope and art, we completed an amazing journey of five days as one team. We went through all the uphills and deep valleys of what this city and its experts had to offer.

All pictures are taken by our talented photographer Luis Barreto.

While shaking off the jetlag, everyone was ready to start the Bootcamp journey full of eagerness and enthusiasm. We kicked off the event with a warm welcome by MasterPeace Medellín and MasterPeace organizing team. Pilar Ibáñez, an outstanding Colombian author and expert in the ‘art of happiness’ and ‘transformational leadership’ gave a great first opening session with her talk ‘Why We Are Here’, describing the reasons behind coming together in Medellín, the city of creativity and happiness. Among the many takeaways, we especially loved the quote ‘Creativity is imagination with responsibility’.

Pilar was followed by Sergio Gutiérrez, the president of Urbano Medellín, one of the prominent names in the scene of urban transformation projects in Medellín. Sergio explained how Urbano Medellín is supporting sustainable urban development through citizen empowerment and transformative political participation, and how the #CitizensBeforeCity project has helped the city transform itself across the recent years to promote safety, civic participation, tolerance, and education – the main success factors of Medellín.

Finally, MasterPeace CEO Aart Bos held an inspiring session that mapped out the concepts and future plans of the global movement of MasterPeace. Using leadership and storytelling aspects, he aims to  continue learning from the past while moving towards future ideas.

To continue the series of Medellín’s transformational factors, Ideas for Peace Foundation (FIP),  an independent think-tank with the mission to generate knowledge, propose initiatives, and develop practices for a stable and lasting peace in Colombia, followed up with some more inspiring ideas. Psychologist and anthropologist Tatiana Mosquera Angulo brought to our club leaders some of the lessons from conflict resolution and peace-building trainings that can be adopted in different parts of the world.

During this day of kick-off, MasterPeace Clubs from around the world splashed colors on the first official Wall of Connection in ‘the city of eternal spring’ with the support of the creative artist Cristian Alvarez from Casa La Loma. Cristian risked his young life spraying paint over violent messages from gangs in order to turn them into beautiful paintings of hummingbirds, watching over the city. The club leaders learned more about his story and joined in painting together the first wall in the city with collaborative efforts. 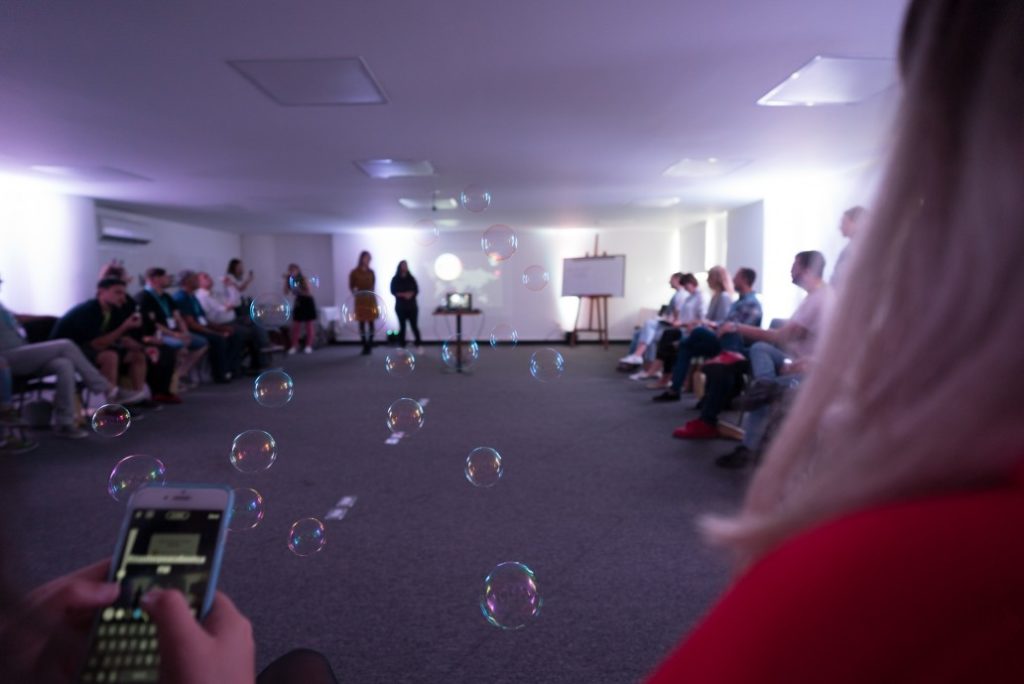 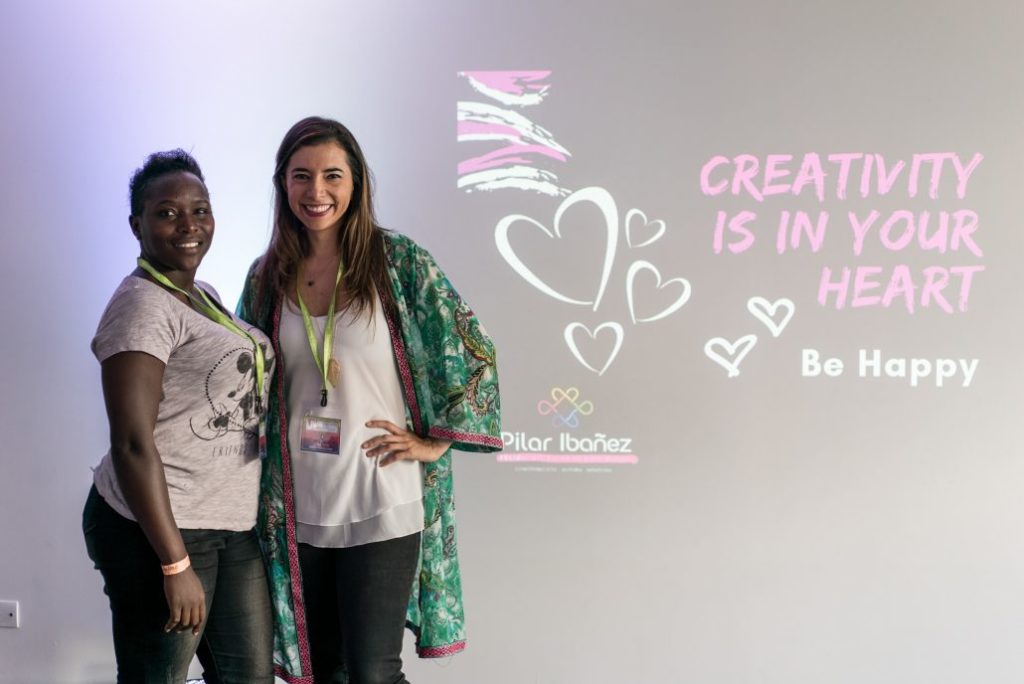 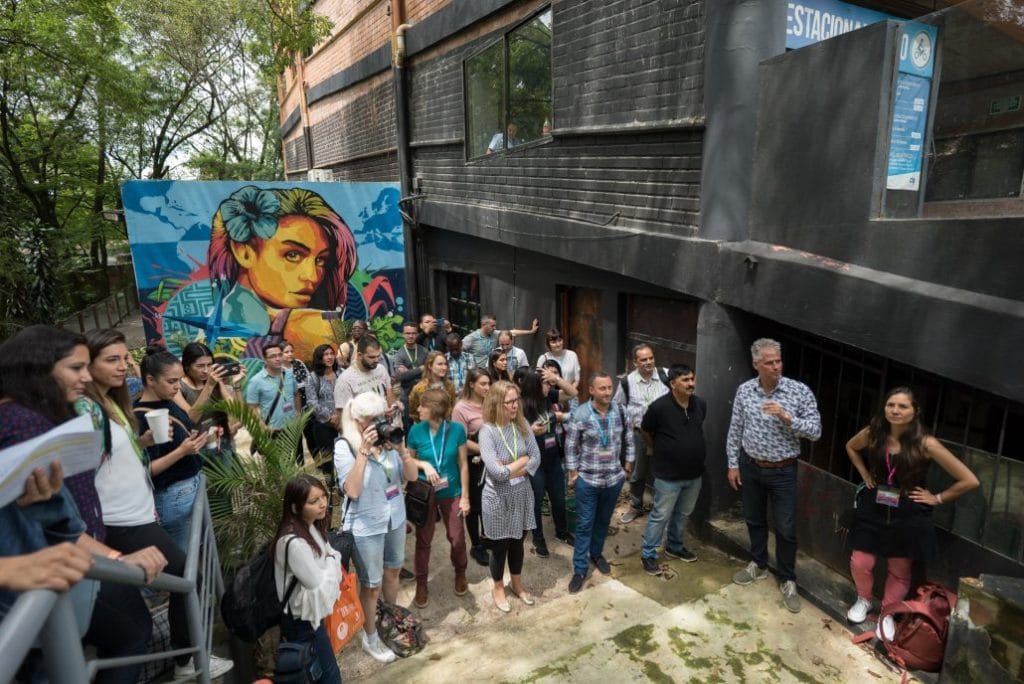 As the best learning happens outside of closed conference rooms, MasterPeace team went for a full tour around Medellín’s several transformational projects. The team hopped on a bus to explore different Medellin Barrios (neighborhoods). They started with La Loma, where young people have created Casa Loma, a space dedicated for the promotion and strengthening of culture, art, sport and healthy leisure. Its young artists have made this place into a beautiful and colorful stop in Medellin. What started as a project to improve people’s lives has now become a center of beauty and color. Not to be missed!

Inspired club leaders moved together to another spot at the Comuna 13, marked as one of the most dangerous neighborhoods and marred by continuous armed conflicts. However, this area that clings to the mountainside above the San Javier metro station has undergone an impressive transformation in recent times, and is now considered safe to visit. The focal point of a trip to the Comuna 13 is the area around the ‘Escaleras Electricas’, the outdoor escalators that provide access to homes in marginalized barrios that were formerly isolated from the city below. The club leaders followed an impressive Graffiti tour around the neighborhood, which has now been turned into a cultural space full of music and happiness. Comuna 13 is just one example of Medellín’s impressive transformational stories, where the innovation of escalators has brought in a powerful sense of connection.

The journey continued as we made a stop to another part of city, visiting the crew of Suenos De Papel and their capoeira show, which is an Afro-Brazilian martial art that combines (non-violent) fighting, dance, acrobatics and music. It originates in Brazil, but has been adopted in Colombia by some world-famous masters. This type of dance is increasingly popular as a way of peaceful resistance, using power, speed, and control across a wide variety of kicks, spins, and other techniques to peacefully channel energy into art rather than into conflict. The neighborhood transformed from a landfill of trash into a beautiful garden and cultural center.

MasterPeacers then reached to the most inspiring part of the trip: the award-winning Union Latina, one of the projects supported by MasterPeace Medellín. It is an academy of dance in the barrio of Manrique, which  breaks the social stereotypes through dance and expression of the body. The dance group brings together kids and adults from all age groups and backgrounds, especially from the most vulnerable ones. We experienced first-hand the transformation that dance can induce. From their tiny studio came out an explosive dance, where every move created a new future of a brighter Medellín and a brighter Colombia. 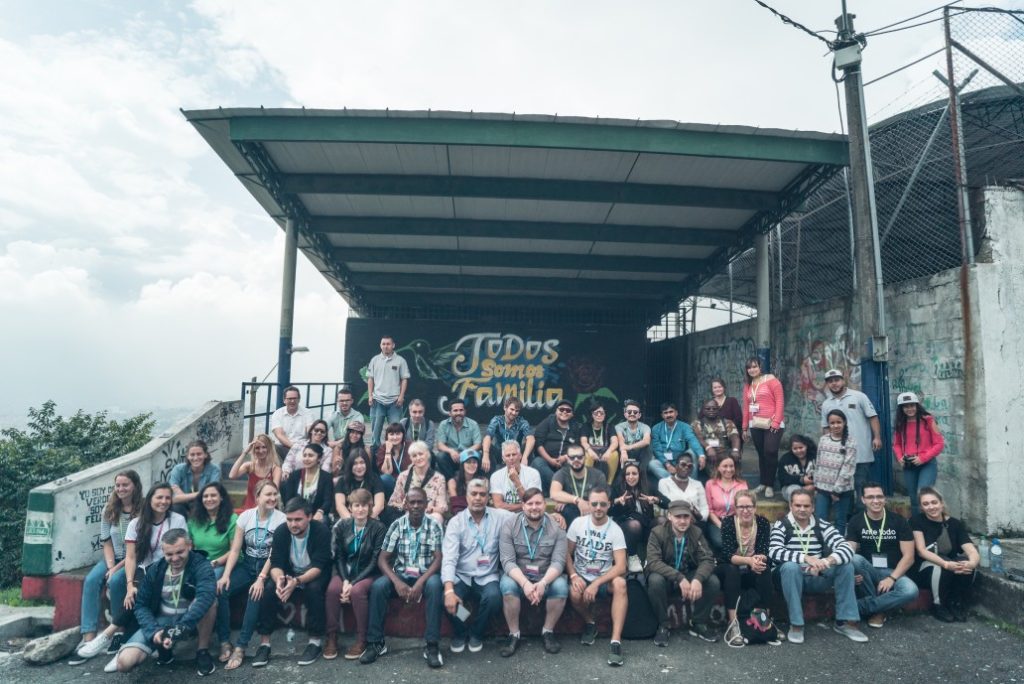 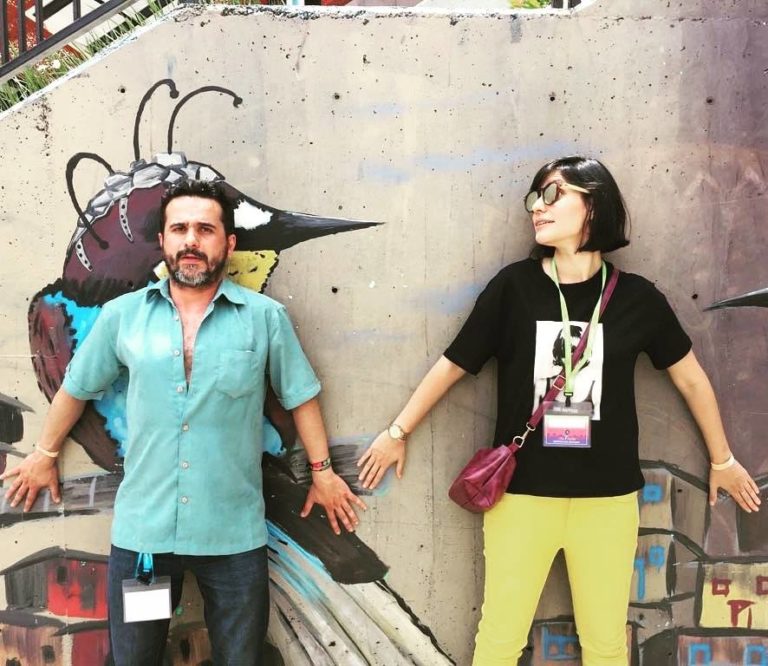 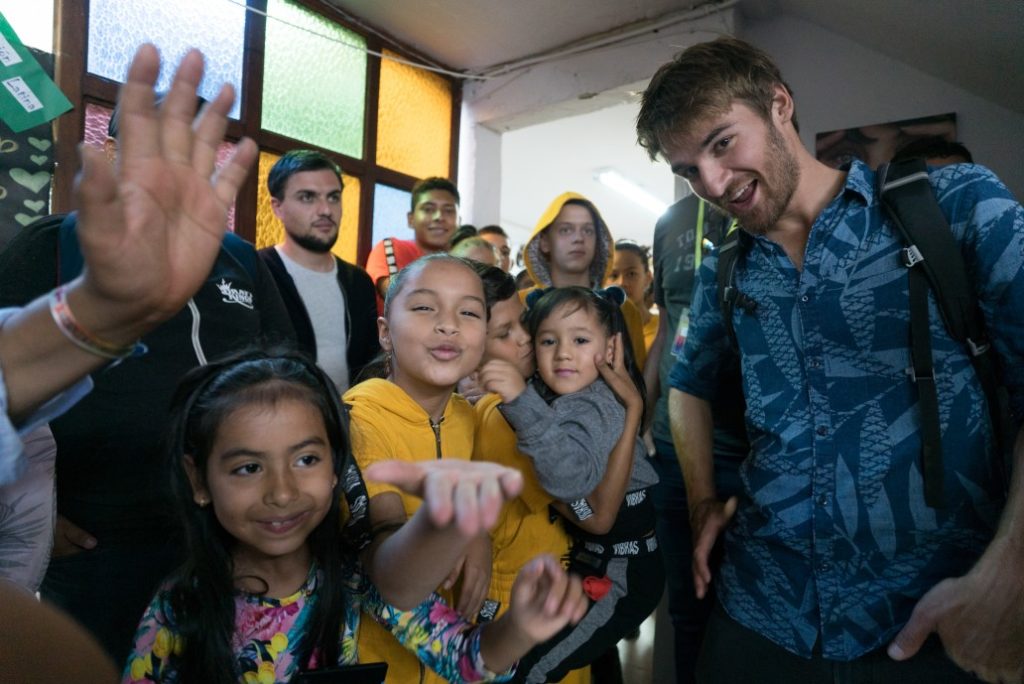 The agenda of the third day involved a deep dive within MasterPeace Clubs. We discussed various elements that make a sustainable organization, ranging from fundraising to communications and team-building, enabling clubs leaders to share their success stories and learnt lessons.

In their session of best practices on grants, Levan from MasterPeace Georgia and Nedim from MasterPeace Bosnia & Herzegovina discussed their successes with gaining confidence on grant applications, ways to look out for opportunities and some tips and tricks for other clubs. Kristine from MasterPeace Germany-Wiesbaden  explained the success factors of her crowdfunding efforts for the book ‘Why are we here?’, telling stories from refugees. The book successfully completed its fundraising goal, making it a highlight for the club and the movement. Dr. Manu from MasterPeace India-Odisha and Slawomir from MasterPeace Poland brought forward their ideas on social entrepreneurship. Slawomir explained their brilliant interactive game on this topic, which received overwhelming interest from different club leaders who look forward to adopting the game locally in their home countries. Dr. Manu told us about the various programs of elderly healthcare and reconciliation that he is successfully implementing in Odisha, India. MasterPeace core team tackled the topic of online presence, presenting four case studies from clubs’ best practices, mentioning the social media efforts of MasterPeace Wiesbaden and the 100 Days of Peace campaign in Uganda. They also  explained the changes to the MasterPeace website regarding the story features and what makes a perfect design.

With the International Day of Peace strong on everyone’s memory, MasterPeace clubs team shared some statistics and highlights from the #IDP2018 celebration. We discussed the idea of pairing MasterPeace clubs and listened to the amazing example of collaboration between MasterPeace Colombia-Cali and MasterPeace Uganda. Jackie shared the challenges that Uganda faced when organizing the IDP celebration in the midst of sensitive political atmosphere, while Luisa told the impressive story of MasterPeace Cali working with victims of the armed conflict to create art to forgive their attackers. It was powerful story of resilience between these two unlikely but very connected MasterPeace clubs. Another somewhat unlikely pair we explored was MasterPeace  Afghanistan and MasterPeace Slovakia, who shared through a live stream their celebrations but also the struggle to get there. From around the globe, the clubs showed how ACT! (Artists Creating Together) for the SDGs gained momentum across different countries and continents. Finally, the sessions focusing on the SDGs of 4, 11 and 16 witnessed a high interactivity from both the clubs that shared their work experience as well as the clubs that listened with interest to start similar projects in their own country. For each SDG, we gave the chance for two clubs to share their work. 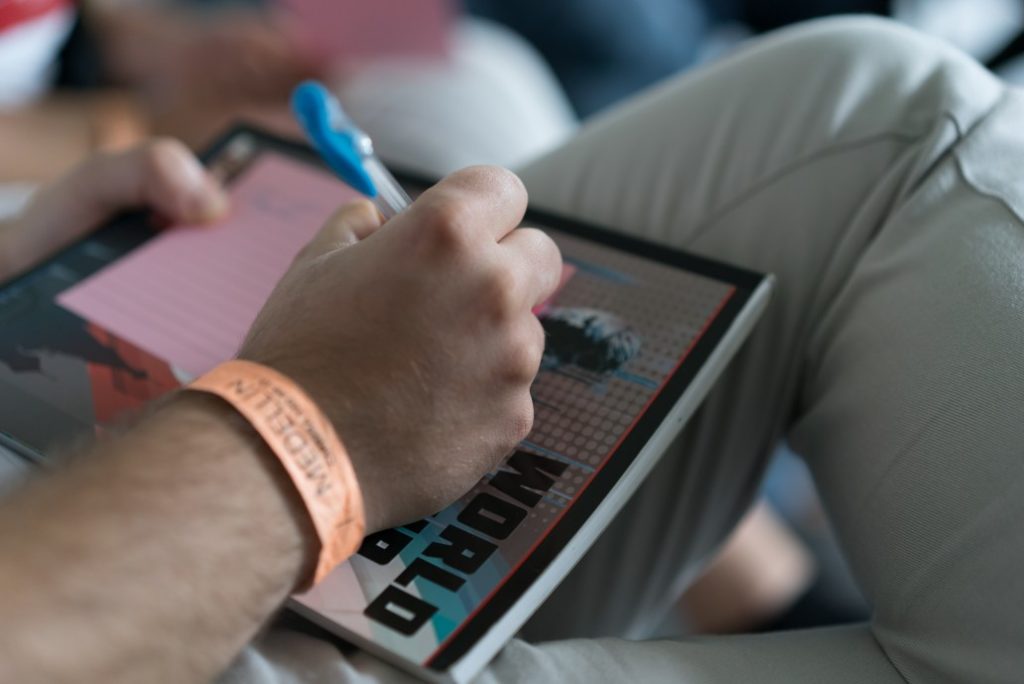 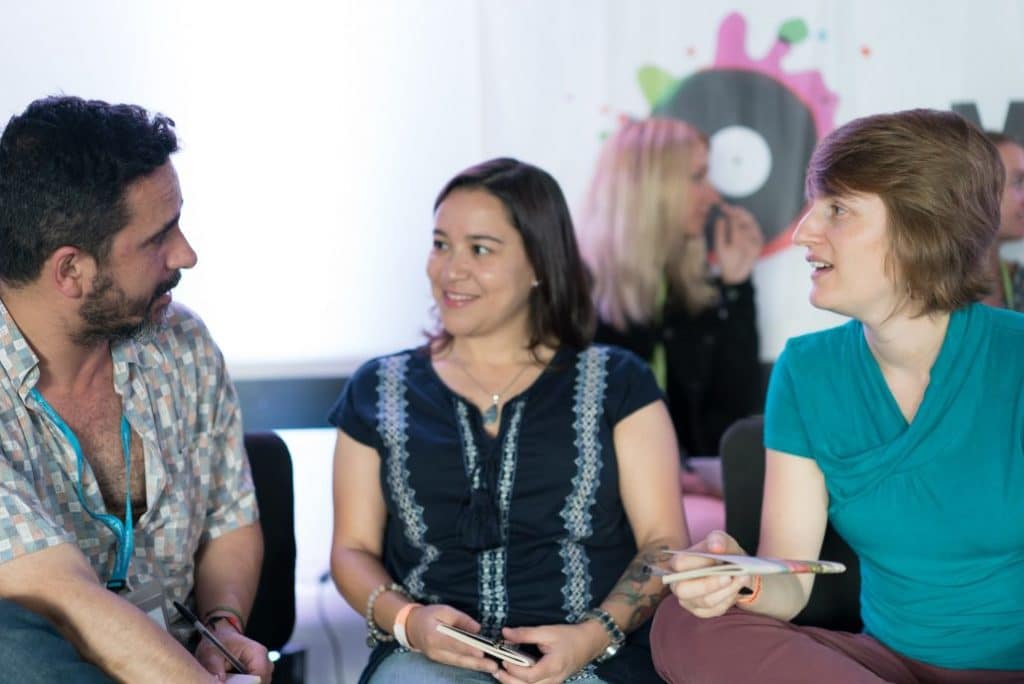 The next day was once again impressive and inspiring, as the social projects supported by MasterPeace Medellín joined our Clubs at the  location of Comfama, one of our biggest local sponsors and partners. Comfama is a nationwide institution of many industries in the Antioquia region, offering services in the areas of health and well-being, education, employment, entrepreneurship, housing and habitat, recreation, sports, tourism, culture and financials. The crucial objective of the day was to connect MasterPeace Clubs with the brilliant 7 transformational projects, so that they could interact with these groups, get inspired and transfer some of these techniques back home. These were the local social projects:

In an unconventional way, we gave some of our clubs leaders the chance to give an open workshop such as ‘Storytelling’ with Kristine Tauch from MasterPeace Germany-Wiesbaden, ‘Territorial Peace’ with Juan Mulford from MasterPeace Colombia-Barranquilla, ‘Inter-religious Dialogue’ with Taras Dzyubanskyy from MasterPeace Ukraine-Lviv and ‘Building Resilient Communities’ Through Art’ with Ligia Benitez Kiamaru and Gaby from MasterPeace Ecuador. 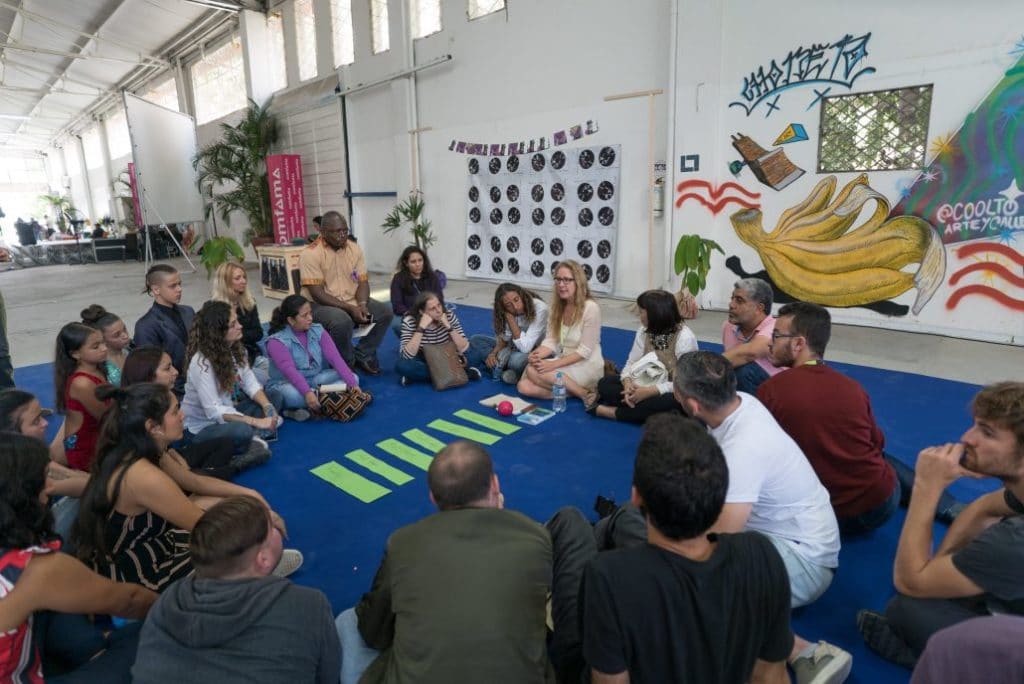 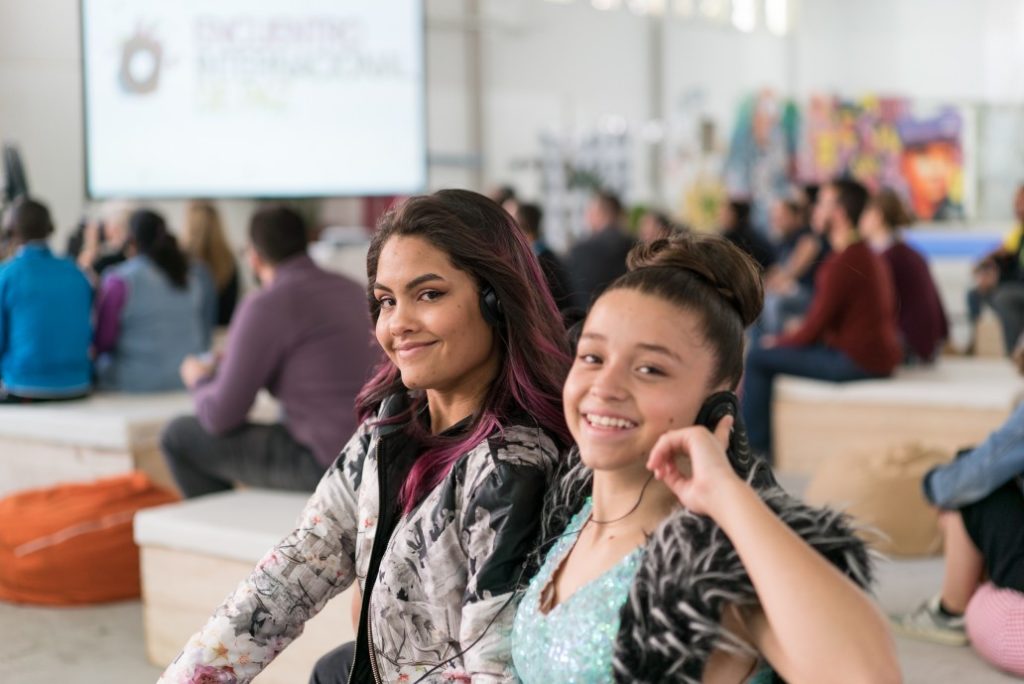 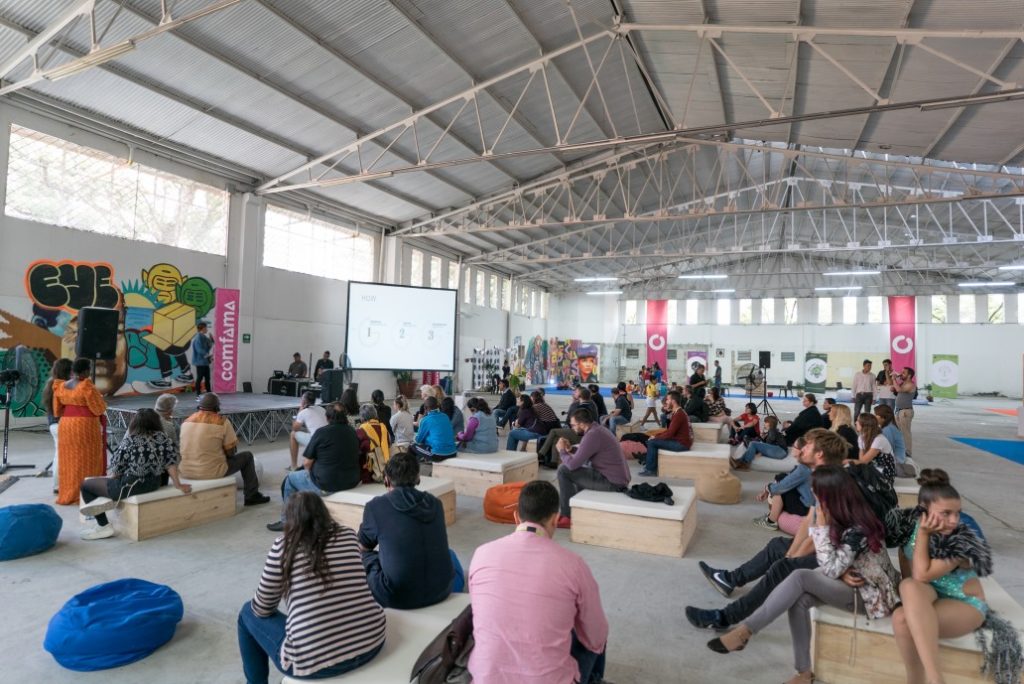 MasterPeace CEO Aart Bos started the final day with some reflections on the success factors of Medellín as a city and what we can learn from that. It was a session that witnessed huge interactions from inspired club leaders sharing their ideas and reflections.

The day included two sessions about the power of music and art in transformation, starting with MasterPeace Mexico and MasterPeace Colombia-Bogota showing examples from around the world where music has been used as a means of reconciliation and peace-building. With a big dance circle, the duo played music from different traditions and asked the club leaders to start the local dance when they recognize the music, which spontaneously turned into a phenomenal dance frenzy clearly demonstrating the power of your local music away from home.

To continue the talks about music, we welcomed an expert on the history of salsa to explain the strong Afro-Cuban, European and American influences on salsa, and how this dance transformed bonds of nations to make its way from streets and bars to opera houses. The Bootcamp ended with sharing the moments of pride with all our MasterPeace clubs, with everyone sharing their lesson learnt and takeaway messages, and most importantly, thanking MasterPeace Colombia-Medellín for making it possible to share such  unforgettable moments. 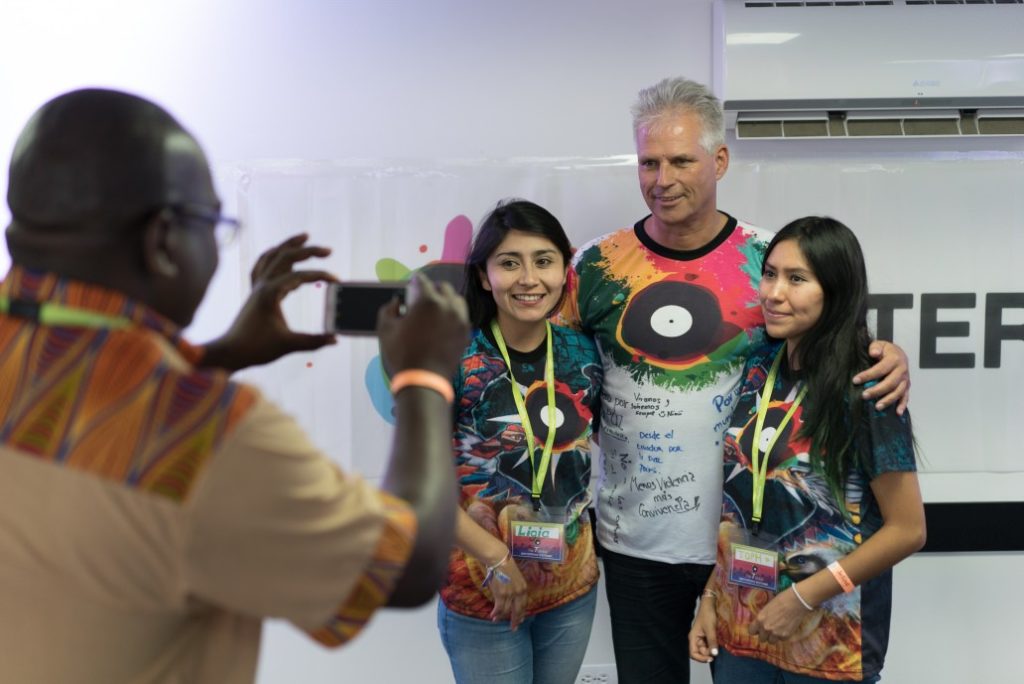 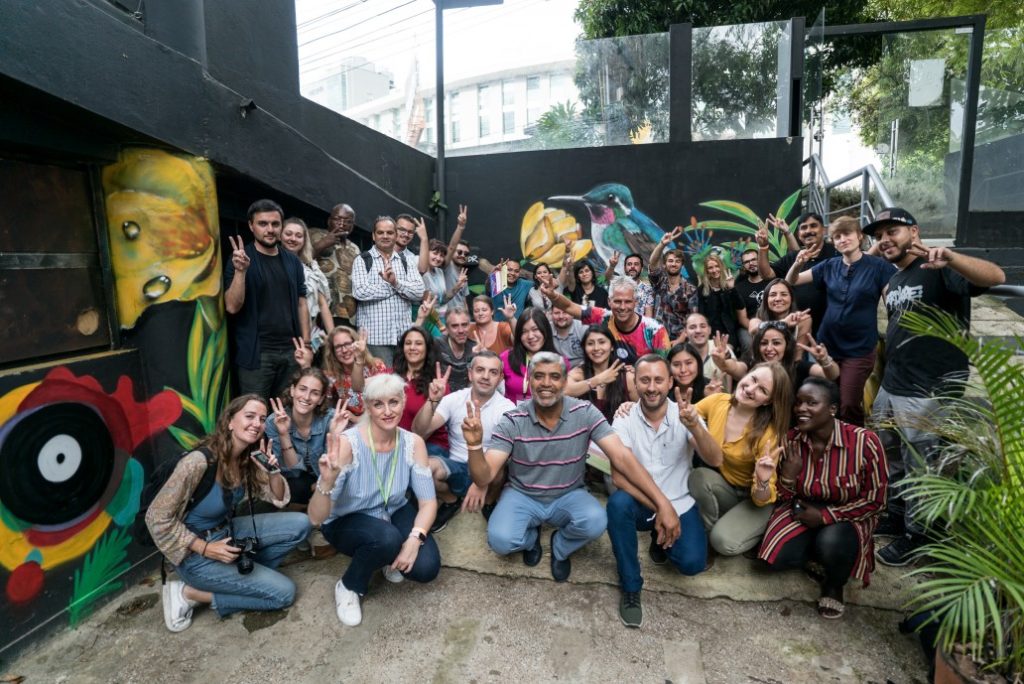 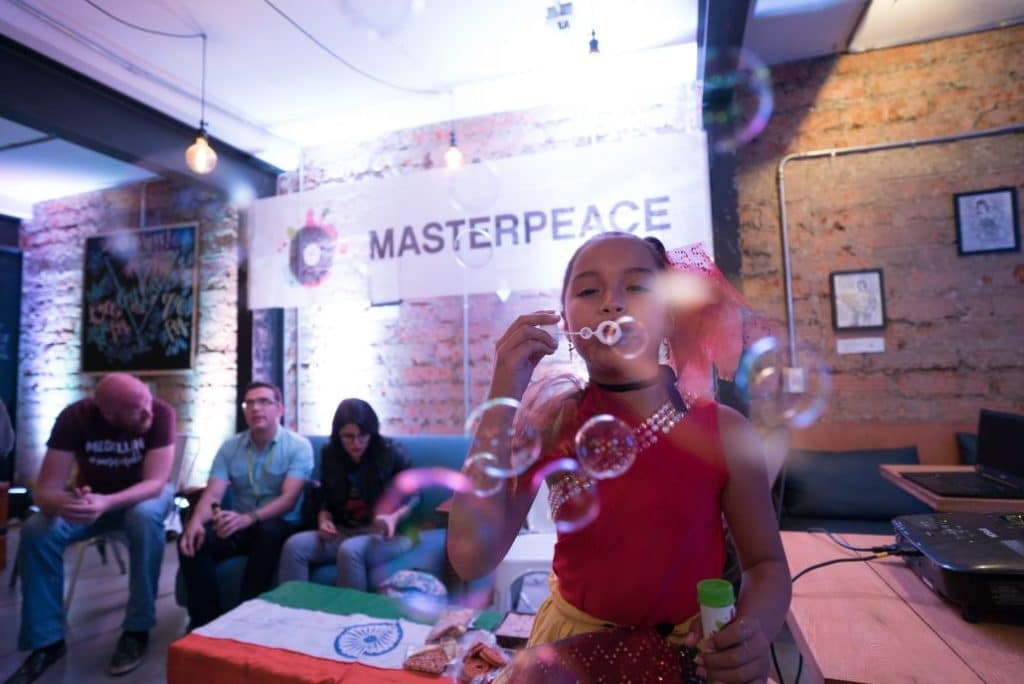 "For MasterPeace Club Leaders Medellin, as a city of transformation and hope, with its amazing history, the ongoing peace process, the lively and friendly people, was a perfect place to be. Latin America has taught me a lot and stole my heart in such a short period of time."

Kristine
Club Leader MasterPeace of Germany-Wiesbaden
"In Medellin we saw how art and music can change the world." 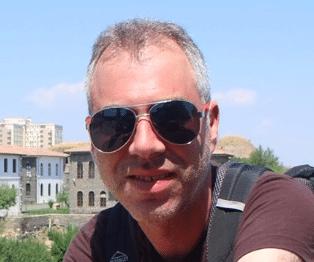 Igor
Club Leader of MasterPeace Croatia
"Medellin proved that dancing, painting have the power to change lives if people came together and took the initiatives." 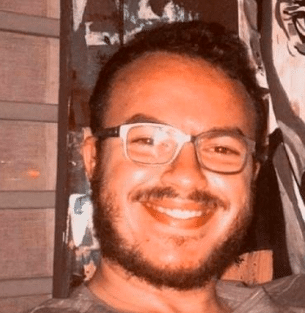 Elmehdi
Club Leader of MasterPeace Morocco
"Never give up on your dream and talent!" 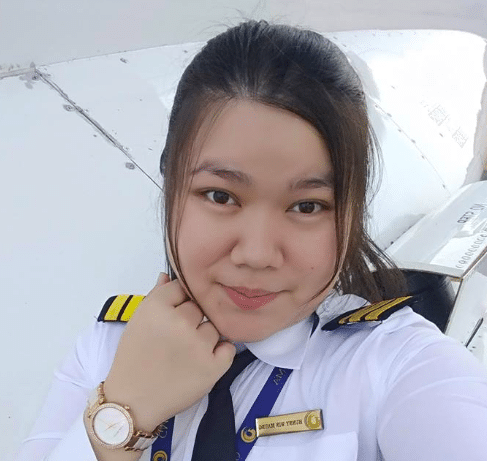