Although we should celebrate them everyday, women do have one special day to have the whole world bringing them to spotlight. We in MasterPeace did not only celebrate women, but also got to cheer for men who equally and powerfully stand up for equality across the globe.

‘From #SunriseToSunset’ – Celebrating Women for 24 hours across 4 continents

MasterPeace celebrated women during 24 hours from sunrise to sunset in 4 continents with pop-up celebrations. This was done on the official International Women’s Day on the 8th of March, when we brought attention to topics of gender equality and appreciated women’s efforts in peace-building.

Under the United Nations theme of 2019: “Think equal, build smart, innovate for change”, MasterPeace countries focused their events on celebrations of acts of courage and determination by ordinary women in diverse walks of life, but also on reflections on how the process still needs to be carried out globally.

Starting the day with sunrise in Asia, from India’s streets where our local club started celebrating women with a traditional dances, the action continued after slowly waking up in three Dutch cities, where our teams took over train stations with morning croissants and message for women and men. Moving on, we saw Africa’s Burundi and Guinea showing support to women in what is considered to be the ‘Great African War’ where women are victims of discrimination and sexual violence. The full day ended with sunset in Latin America in cities of Medellin and Mexico City where muralists, dance groups and lots of workshops were dedicated to empowering and connecting women.

All in all, this MasterPeace campaign aimed at a public engagement track: MasterPeacers asked our supporters everywhere to make one small action to recognize women in their own community, from a simple ‘thank you’ to organizing workshops, events, community breakfasts and many others as a bow of respect to amazing women in our lives.

Now we take a quick snapshot of women around the world:

MasterPeace #SunriseToSunset started with India-Odisha, where volunteers were creating art for a violence-free slum!

The volunteers had one big message to the world: “Because you are women, people will force their thinking on you, their boundaries on you. They will tell you how to dress, how to behave, who you can meet and where you can go. Don’t live in the shadows of people’s judgement. Make your own choices in the light of your own wisdom!”

India suffers what some activists groups calls ‘the biggest human rights violation on Earth’, still studies shows that sexual abuse in India remains widespread despite tightening of rape laws in 2013. According to the National Crimes Records Bureau, in 2016 the rape of minor girls increased by 82% compared with the previous year. Chillingly, across all rape cases, 95% of rapists were not strangers but family, friends and neighbors.

To celebrate the International Women’s Day 2019, MasterPeace Bangladesh organized a discussion session and cultural competition in Beanibazar College auditorium highlighting the Women’s Day theme Better The Balance, Better The World in Beanibazar, Sylhet where thousands attended the whole-day activities, which was a break-through the mostly women who attended but also joined in the planning and execution of the activities.

Studies show the issues in Bangladesh facing women’s rights the labour force participation rate in 2015-2016 was 81.9 per cent for males and 35.6 per cent for females. Of these, 95.4 per cent females are usually in an informal employment as wage labourers which even jeopardize further on their rights.

MasterPeace Pakistan Karachi celebrated International Women’s Day on March 8th at the Caritas Pakistan Karachi Centre, the day represents an important opportunity for individuals, communities, and countries to celebrate the progress, great achievements, and contributions of women, raise and confront difficult questions and challenges, build broad support for women’s rights, and work towards the full and equal participation of women within all areas of society.

The lively program organized by MasterPeace Karachi and Caritas Pakistan Karachi with wide variety of events, including music and the activity of forming 5 teams according to their First letter of their name to “Think a Creative Idea” for transforming women in our skill center. Activity is conducted by MasterPeace Karachi and some lovely ideas were given by the groups. The best idea selected is “Marketing Dresses in communities in the upcoming festivals of Muslims, Hindus, Sikhs, Bahais and Christians on nominal prices, so that everyone can celebrate their festivals”. Initial support of two more sewing machines will be given by #MasterPeacePakistan so that the group of 20 women can work in 2 shifts.

Our club in Wiesbaden works closely with different groups to support them being visible by encouraging them to share their experiences through stories and this day was just another moment to do so.

MasterPeace Wiesbaden team in Germany was presenting the idea of The Story Store at Mindspace to open the stage to women and men to tell their own personal stories. It was just the beginning of a Storytelling journey that was brought to life by Azal Al-Salafi and her colleague – a beautiful starting point for Women’s Day to empower other women.’’

Women in Germany in general enjoy a wide range of rights, which is not perfect yet however on this day this year, Berlin announced it as an official day off, but our club works with target groups that enjoys far less rights, where asylum policies in Germany put refugee women at risk.

MasterPeace took over train stations on a busy morning reminding women and men of what is important! Celebrating each others, and celebrating equality. With the delicious sign of sunrise, freshly-baked croissants sponsored by Albert Heijn with different messages, that encourages the receivers to do some actions, either to call an important women figure in their lives, or appreciate a woman that they feel thankful to.

Together with UN Women in The Netherlands, we had the chance to celebrate also the campaign, He for She, which puts both genders on equal foot supporting each others.

We gave our last croissants to an extraordinary lady Geraldine Moodley. She is a human rights lawyer, activist, trainer and a great inspiration to all whom would like to make a difference in this world, and it was indeed match made in heaven for that day.

For the International Women’s Day on the 8th of March (#SunriseToSunset!), the team of MasterPeace Burundi brought together dozens of people from the local community to highlight the important role and celebrate the talents of the women. A group of their young dancers of girls and boys performed in front of women who had gathered to the place of ceremonies. The theme of the day was “Together for Gender Equality”.

Women play a major role in Burundi’s national economy and represent 55.2% of the workforce, however in this challenging situation of the country, many don’t have access to basic human rights and had to suffer the post-conflict trauma of memories of rape and other war abuse.

Women rights and right to equality is an topic that’s extremely relevant in Mexico, as femicide, harassment and other forms of violent behavior against women are happening on a daily basis. Together with Ximena Martinez Galindo and the rest of her team, Sofie decided to organize Non- violent communication and art events for employees of big companies as Aeroméxico and KPMG.

For Aeroméxico, MasterPeace Mexico worked closely with the leading airlines company to train employees in the Peace Neighbourhood Atlampa together with women from Atlampa itself. First of all, they kicked off by talking about the meaning of Nonviolent Communication, personal experiences of verbal harassment and tips and tricks on how to respond on such forms of communication by using this form of communications, followed by the challenge to lift each other up. The MasterPeace team, in cooperation with the amazing artist Eva Bracamontes, facilitated a conversation on what the women appreciated about each other and other women role models within their community. The artist Eva created a drawing of a mural based on the workshop and conversation, which was eventually executed by the trainees.

For KPMG, a comparable training was given to the employees of KPMG. However, instead of painting a wall all female employees of KPMG Mexico will receive a beautiful bag designed by María Lumbreras shared from Mexico KPMG to all women in the region of Latin America. 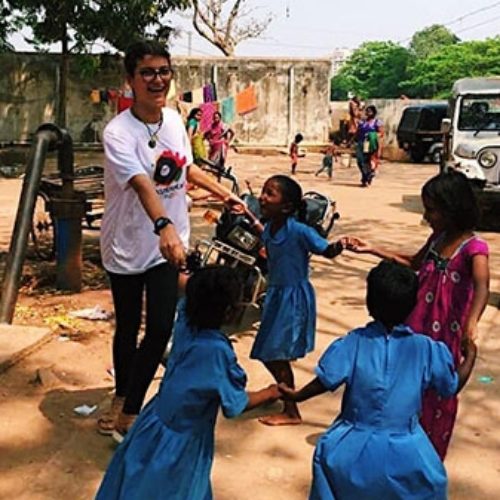 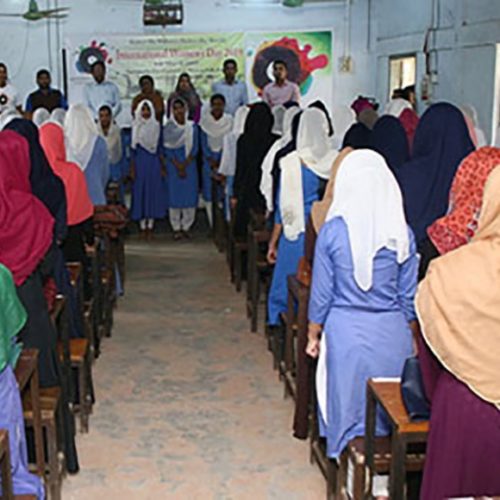 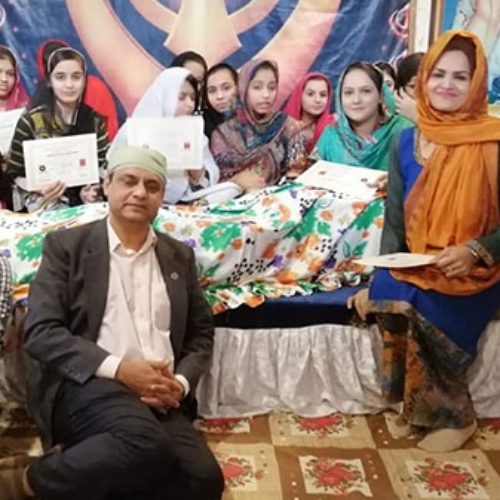 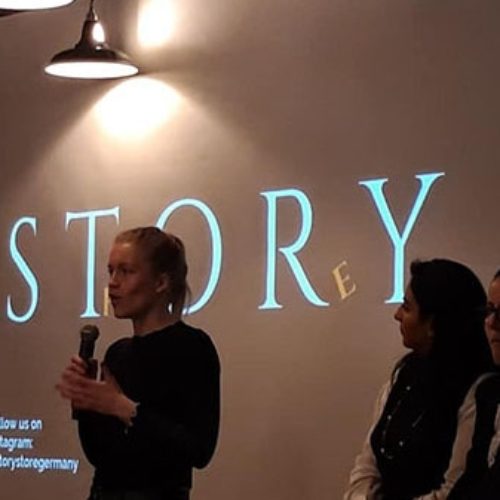 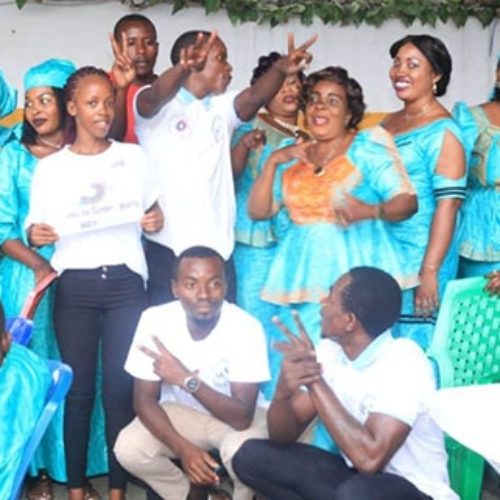 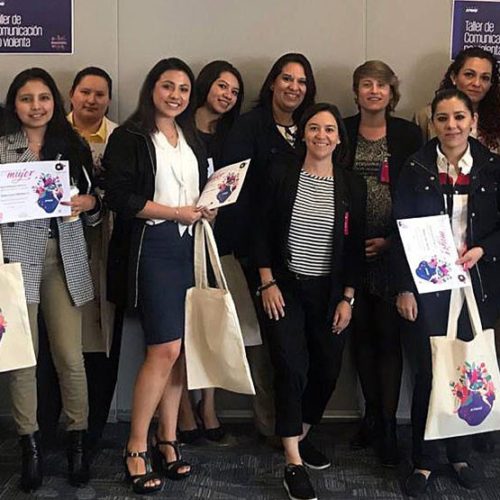 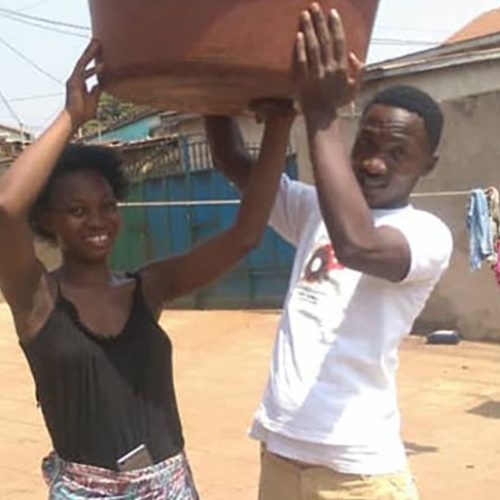