MasterPeace around the world: Ivory Coast

With #MasterPeace_Around_The_World we focus on the people behind our 45+ MasterPeace clubs. We are built on their ideas, hard work, and creativity and would like to share their stories with you.

In 2015 MasterPeace was approached by Desire Adon (Ivory Coast), a young and motivated men who dedicates his life to making a positive impact in his community. According to Desire, his country needs positive changemakers after the First Ivorian Civil war (2002-2004) that led to deep divisions within the country. Desire Adon decided to join the MasterPeace movement because he believes in the power of the 17th Sustainable Development Goal: Commitment to Partnerships and Cooperation! and hopes that inter-cultural dialogue on an international level will help him to form a basis for regional dialogue on important issues as culture, gender, unemployment, and religion.

This year, Desire is focusing on two specific projects:

Via transport cars Desire wants to spread messages of peace in 5 cities in the Ivory Coast. These stickers will be spread among thousands of truck drivers and will be of a length of one meter.

MasterPeace Ivory Coast is starting an incubator dedicated to agricultural entrepreneurship. In this manner they aim on offering at least 30 youngsters a job and create a market for local products, aiming on fighting youth unemployment and stimulating the economy.

Thank you for your creative efforts! 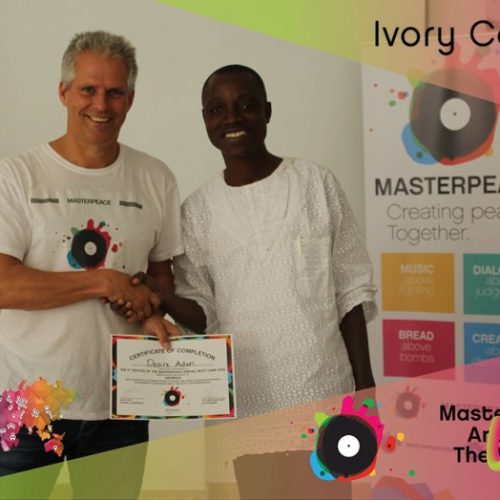