MasterPeace around the world: Sri Lanka

With #MasterPeace_Around_The_World we focus on the people behind our 45+ MasterPeace clubs. We are built on their ideas, hard work, and creativity and would like to share their stories with you.

Nishanta Kumara, MasterPeace Club Leader in Sri Lanka, has been active in peace-building activities for over 20 years in both Colombo and Ratnapura. His speciality lies in creating interfaith dialogue to bring together Buddhist (70.2%), Hindu (12.6%), Muslim (9%), and Christian (7%) communities in Sri Lanka – a country that has been torn by civil war between 1983–2009. Via improving the quality of education (SDG 4) and the creating pleasant living environments (SDG 11), Nishanta aims foster a more sustainable and peaceful Sri Lanka.

Unfortunately, the ending of the civil war in 2009 did not lead to a peaceful Sri Lanka. In the years after, tensions between Muslim and Buddhist communities were on the rise. The violent involvement of the Muslim community is quite rare in the recent history of Sri Lanka, as the civil war had been between the Sinhalese (Buddhist) and Tamils (Hindus). Muslim communities rarely got involved in the violence and managed to stay out of the war. However, , in March this year, the Muslim-Buddhist clashes took a dramatic shift and hit an all-time high when the tensions triggered the government to declrate a state of emergency. The government of Sri Lanka blocked social media channels for a period of 10 days as this was one of the main ways to recruit for mobs and hate campaigns.

‘Dialogue is a personal and human process, it’s all about listening and talking about needs.’ – Nishanta Kumara
As a response on these clashes, Nishanta Kumara and his team organized two dialogue sessions in April and May 2018. The first was aimed to bring together the youth to talk about transitional justice, the integration of peace-building as a reconciliation process, and the role of social media in the spreading of hate. He brought together over 60 youngsters (aged 18-25) from different religious backgrounds. Next to this, Nishanta wanted to involve governmental officials in peace dialogues as they play a major role in both peace-keeping and reconciliation. Therefore, in the second session, Nishanta invited along over 40 government officers to explore the basics of dialogue togeheter. In the end, the governmental officials managed to listen to each other’s arguments and open up to their colleagues to discuss the sensitive issues of religious and ethnic conflict. 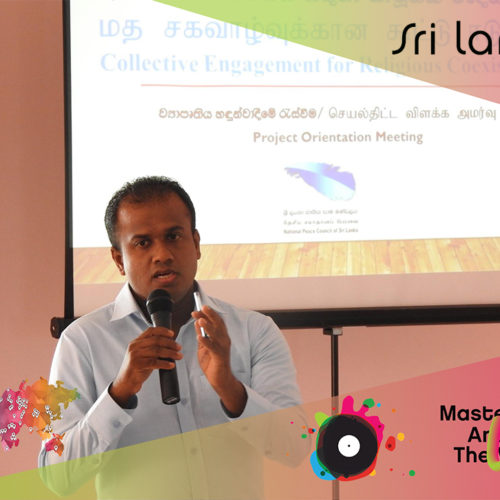