MasterPeace mezcal: A drink with a cause

Each sip of this 100-bottle limited edition mezcal will leave behind an aftertaste of helping promote peace and nonviolence.

Trino, a mezcal and tequila connoisseur, drew one of his Tales of Cops and Robbers comic strips for the MezcalPacificador box sold by the social organization MasterPeace Mexico. The NGO, dedicated to promoting peace and a culture of nonviolence, launched a 100-piece limited edition mezcal set in collaboration with the Oaxaca mezcal company Las Deliriantes.

“It’s a beautiful project. Promoting alcoholic beverages isn’t something I do; many beer companies have approached me to collaborate with them, and I always say no, because I’m not interested in promoting brands,” the cartoonist, Trino, said during an interview. “I’m a mezcal connoisseur and this project also has an interesting social overtone. It supports an organization and it’s a good product. It’s well-designed and comes with the understanding that your money is going to a social cause.”

MezcalPacificador is sold in a box that contains two glass-blown glasses designed by Studio Xaquixe, out of Oaxaca. On the outside of the box is a Tales of Cops and Robbers comic strip, one of Trino’s favorites. In the story, one of the characters says to the robber that there isn’t money in the vault, only mescal, because it is worth more than a dollar. “I think that it is worth more, because it’s what Mexicans should be investing in,” Trino joked.

MasterPeace was founded five years ago in Holland and Egypt to foster peace through art, music, sports and dialogue about themes that interest each community, explained Sofie De Wulf, director of the Mexico program. The NGO currently has working groups in 47 countries, the majority of which are experiencing conflict. “I founded MasterPeace in 2014 and our work here has centered on inspiring and raising awareness about different social issues. We invite artists to collaborate with us in community workshops,” explained De Wulf, who is originally from Belgium. “The MezcalPacificador arose as a way to raise funds for operating costs. The idea is to launch a new edition every year. We have an online store that sells artist’s products, such as by the painter Felipe López de la Peña, and people associated with MasterPeace.”

Under this organization, Trino has led caricature workshops for young people. This opportunity helped him to break out of his shell. “It’s a very interesting project that plays a really cool social role at the international level,” Trino noted. “Being able to share my experience and answer the students’ questions, even though I wasn’t always able to answer them, was a way for me to get out of my comfort zone. Being able to interact with people is very enriching. I’m glad that they didn’t get bored in my class.” 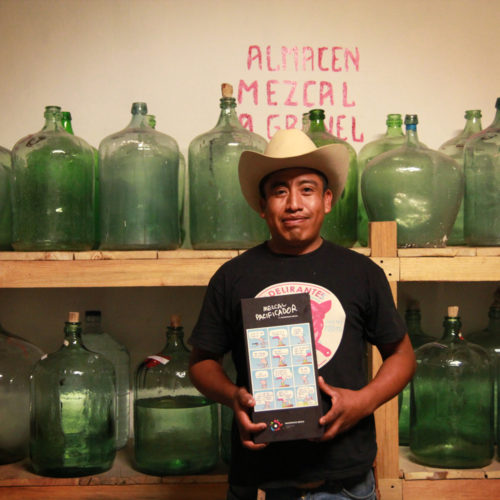 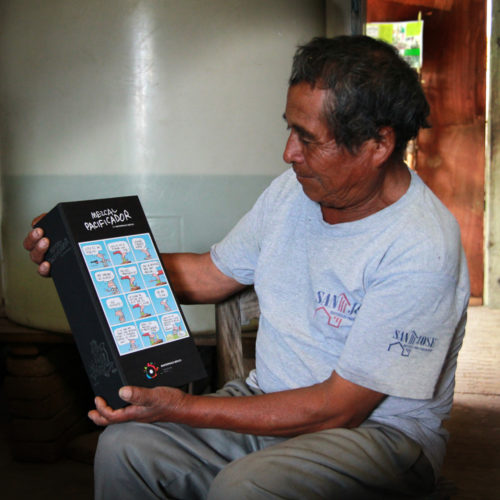 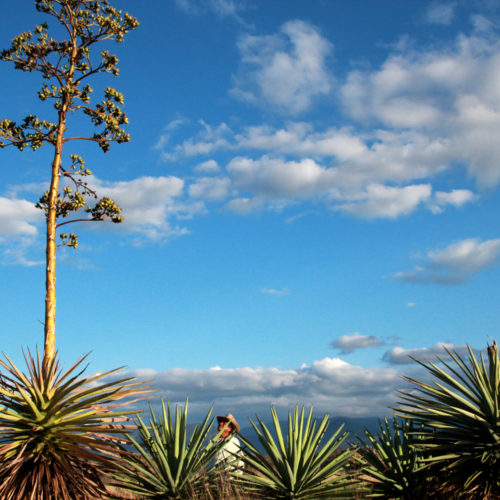